Have you ever asked the Father for something big, something miraculous, and been so afraid that He might choose to say no that you avoid His presence altogether? I have.

So you hide away, like the original sinners amongst the leaves in the garden, and when He calls, you cower because what if you don’t like what He has to say? What if you don’t have the courage to face what’s coming?

Yeah, that was me a few years ago – no biblical courage to be found.

You feel this yearning to give in and stumble to His arms, yet your stubborn heart resists with questions like why? and right now?

Friend, have you ever felt like David before Goliath, wondering what happened to your army, praying for the courage to “fight the good fight” even if it means you’re doing it alone?

And perhaps, like me, you feel more than a little lonely standing there with your simple “slingshot” in hand. Maybe you long for a superhero sidekick or two…or three.

As you stand there, wind in your face, jeers wafting through the air from the Enemy’s camp, you hear a still small voice speak, “Courage!”

That’s the message our Father God gave me all year long during that difficult time.

He sent it to me a million different ways – through a simulcast, bible study, a talk I was preparing for a MOPS group, prayer and quiet time, even through social media – you name the method, He’s used it.

At times I soared gloriously on that message, that promise. Other times I found myself a doubting Thomas, looking for evidence, asking for proof. Foolishly, I kept looking for rescue to come in human form, but He continued nudging me, “Courage.”

For am I now seeking the favor of men, or of God? Or am I striving to please men? If I were still trying to please men, I would not be a bond-servant of Christ. Galations 1:1-0

At first, I thought He meant the message for me in one specific area – that of pursuing writing and speaking. But after a while I began to see that the need for courage applied to so many other areas of my life – marriage, parenting, trusting God, finances, and especially … well, the potentially life-changing Giant we faced.

The Foundation of Biblical Courage

Here’s the thing I’m learning about biblical courage, friends: it’s not supposed to come from me or you or any human source.

A quick Old Testament search for the word courage reveals it is often used in connection with the phrase “be strong,” especially in the early years of Joshua’s leadership.

Keep in mind that Joshua was new in his leadership role, and he had some big shoes to fill. I mean, who wants to follow Moses, the man with the burning bush experience and the credit of leading the Israelites out of slavery?! In addition, Joshua faced the enormous task of leading the people of Israel to conquer the Promised Land – hooray, right?! Well, sure that sounds good after wandering in the desert an extra forty years, but something many Christians don’t realize is the Promised Land wasn’t empty.

No. The Promised Land was filled with “giants” and well-fortified cities. Joshua faced this very land. No more Moses to look up to and learn from. He was flying on his own set of wings now with a seemingly impossible task lying before him.

I’m sure Joshua was afraid. I know he wasn’t completely confident he was up to the task. I’m positive because the Lord reassured him again and again in the first chapters of Joshua that He would be with Joshua. He commanded Joshua four times to “be strong and courageous” in the first chapter alone! 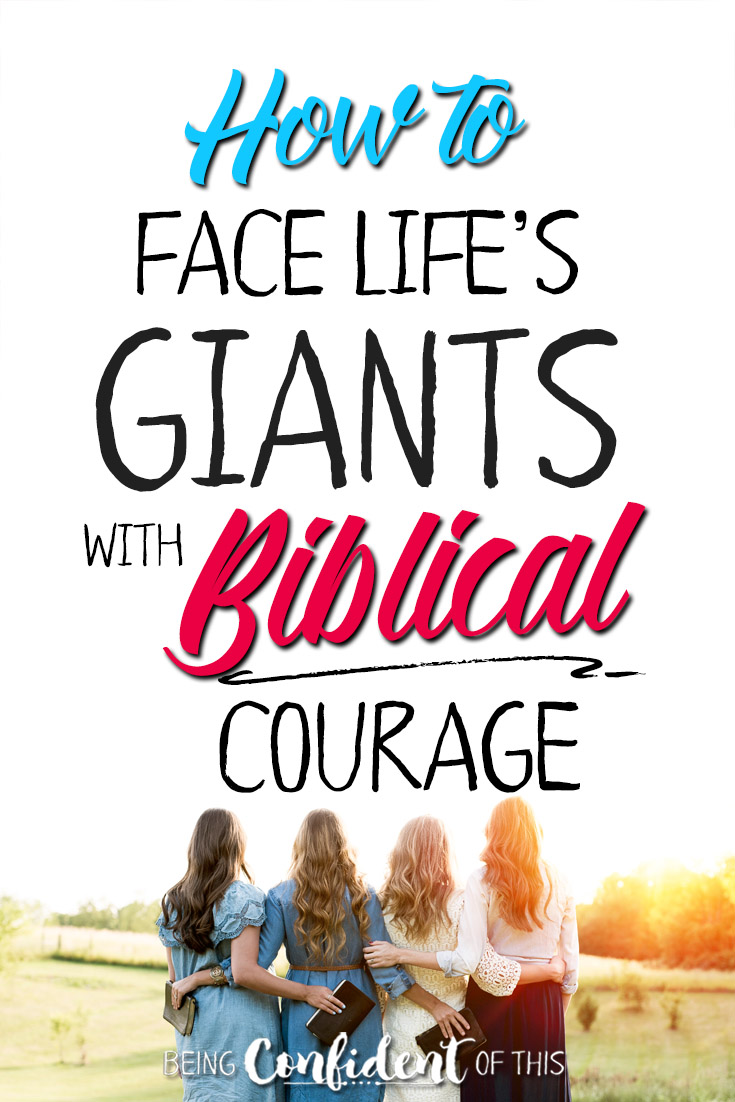 How We Get Biblical Courage All Wrong

And I’ve realized something about myself this year: I’ve taken the world’s view on Courage – you know, chin up, man up, just do it, what’s the worst that can happen, and all of the other sentiments we use to overcome our own fear.

Maybe you have taken that view, too, without even realizing it.

But that’s just not God’s view, my work-in-progress friends; that’s not what God tells Joshua. It’s not what He tells me or you, either. Consider this: when you look up the Hebrew for “strong and courageous,” you find both words or phrases (be strong, take courage) linked back to the Hebrew root chazaq (pronounced khaw-zak’).

Previously, I wrote about that root, but I was more focused on waiting patiently.

We must take it, you see, because chazaq doesn’t come from any human source. No, chazaq, biblical courage, comes from a supernatural act:

Don’t you see? The courage comes from Him, sisters! He doesn’t expect us to muster courage up within ourselves. He offers it from His very nature, for our taking!

What Biblical Courage Means for Us

We can be courageous Christians because courage flows from our Father God.

It’s true. We’re destined to succeed in whatever He wills for us when chazaq comes into play.

So, I’m asking for some BIG things right now, Father. And I’m a little afraid, so I’ve been hiding out, avoiding your Presence. Hiding has only served to leave me feeling lonely and a little bit miserable. But like my friend Arabah Joy wrote, I’m asking for “rain” and I’m taking my umbrella with me. I know I’m lacking in the courage department right now and the fear seems to be winning a little bit. But I hear you say, “Courage, daughter,” and I know that means that You’ve got this. Chazaq – it’s Your Courage, not mine.

It’s Your battle, not mine. Suddenly that giant doesn’t seem so big. And I’m crying, but I’m grinning, too, ‘cause I’ve missed you, Father. I’ve missed you.

Have I not commanded you? Be strong and courageous! Do not tremble or be dismayed, for the Lord your God is with you wherever you go. Joshua 1:9

I hear Him whisper Courage to me, and to you, too, sister.

Do you hear it?

If you’re interested in reading more about biblical courage, check out this article from Desiring God.

I clearly remember sitting in front of our new marriage counselor, my face burning with both embarrassment and anger. Within the first few minutes of meeting, it became clear to me that he had already assumed that I wasn’t walking with the Lord. In truth, I was a confident warrior wife, determined not to give up!

If only he knew… perhaps he would have been more gentle and less presumptive.

Goodness knows those hinted at accusations were true of me in the past, but praise the Lord, I had changed as a wife.

Nevertheless, I began to question myself. His suggestions played right into my perfectionism as I wondered – maybe I haven’t prayed enough? Maybe my faith isn’t strong enough? Maybe I’m really not a good enough wife and that’s why our marriage is struggling?

These are questions many Christian wives struggle with!

How can a Christian wife know she is doing her best? How can she be a confident warrior wife who perseveres, one who fights for her marriage?

Fighting for a healthy marriage may feel like an impossible task, friend, and it is if we try to fight in our own strength. But let’s not forget that we who are in Christ belong to the God of the impossible.

Lately I’ve been reading through the Chronicles, and I’m impressed with the number of times God helped his people overcome enemies, even when outnumbered! Often, God’s people didn’t even have to go into battle because the Lord went before them and destroyed their enemies in miraculous ways.

A confident warrior wife is one who remembers her strength doesn’t come from herself, but from her Almighty God!

A confident warrior wife exercises her faith daily – not perfectly, but persistently. She prepares for battle in very specific ways.

Follow me over to my friend and co-author Rebekah Hallberg’s site for 5 Tips on How to Be a Confident Warrior Wife.

I’m also sharing some encouragement for times when God doesn’t intervene and a marriage fails. 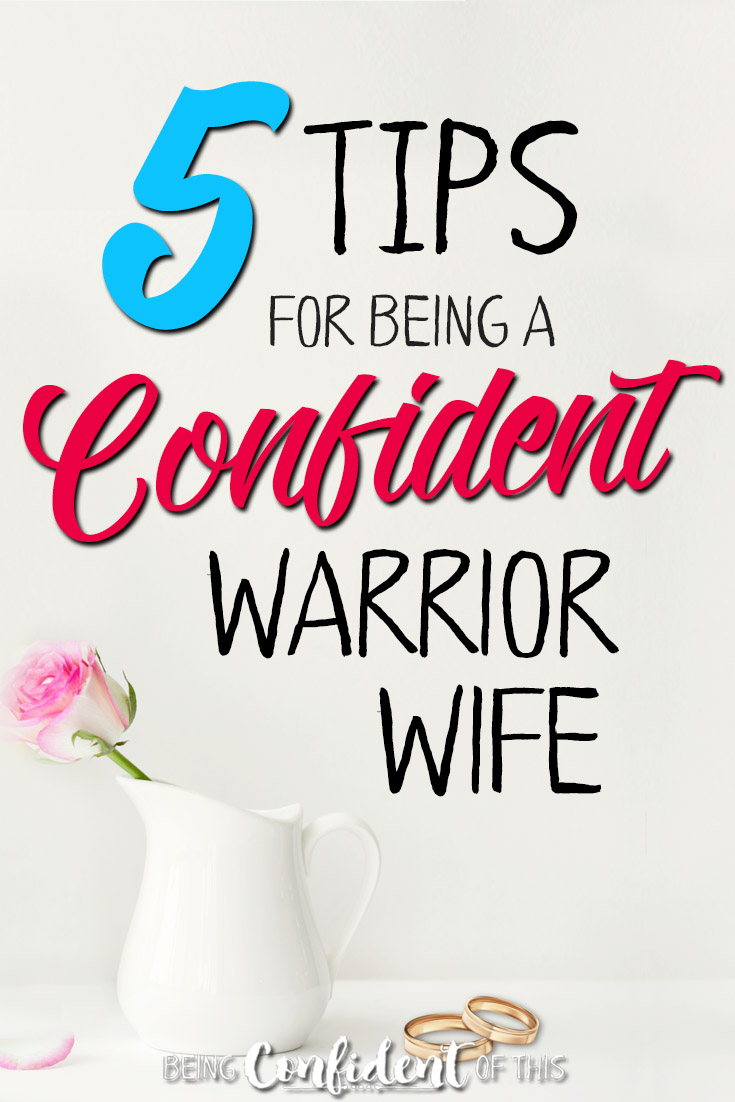