I can tell you from personal experience throughout my life that being falsely accused of acting in an unloving manner just plain hurts. Like most other women (and quite a few men), I like it best when people like me. 🙂

Yet there have been times in my life when I have been conscience-bound to speak truth into a tough situation even if I expected it might not be well-received.

What makes truth-telling even more difficult, however, is when fellow  brothers and sisters in Christ ask us not to “rock the boat” for fear of repercussions.

I do not refer to those voices who caution us to speak God’s truth gently or even intelligently (that message is needed, too!), but those who would ask us to quit speaking truth altogether.

Sometimes false accusations about our character or motives (not just the words we speak) dissuade us from truth-telling. They work just as the enemy intends by effectively shaming us into silence.

Sometimes we simply feel alone in our truth-telling, and so after a while, we simply give up.

According to Billy Graham, “Courage is contagious. When a brave man takes a stand, the spines of others are stiffened.”

We need courage now more than ever, my truth-telling friends!

I’m reminded of this recent favorite from Galatians 1:10:

As a bond-servant of Christ, I am willing to cause offense, even at great personal cost, not because I despise others or believe I am so much better, far from it. If you’ve read this blog, you know without a shadow of a doubt that I fall short of perfect.

I eat when I shouldn’t,

I disrespect my husband,

I choose anger instead of joy.

I’m a miserable sinner saved solely by grace, Praise be to His Name!

In spite of my own imperfections, I am willing to take the risk of offending because I believe God’s Word enough to bear the wound of potential rejection.

The wound is worth it because I know the power of both grace and truth in my own life for affecting change from the inside-out, and I want others to experience that same power, too, all for the glory of the Lord!

Furthermore, I believe Jesus when He says in Matthew 5:11-12, “Blessed are you when people insult you and persecute you, and falsely say all kinds of evil against you because of Me. Rejoice and be glad, for your reward in heaven is great; for in the same way they persecuted the prophets who were before you.” (emphasis mine)

My brothers and sisters in Christ, if you are bearing the brunt of a difficult stance, whether public or private, please realize that you are not alone. In fact, according to Jesus, you are in excellent company!

You see, the world would have us Bible-believing Christ-followers to accept that truth-telling isn’t just un-kind, it’s downright un-Christian.

It’s another Screwtape reversal in which something that is based on a little bit of truth sounds right and good but is really twisted, insidious and destructive.

The world would have us believe a lie.

There is no shame in truth-telling, friends.

Because being a Christian is being a follower of Christ, and Jesus had no problem speaking truth in love, even to the point of death itself. Likewise, his disciples followed his example to their own gruesome deaths, all for the sake of a gospel that the world around them found offensive.

I applaud what Answers in Genesis has to say on the issue:

“As Christians, we need to have the utmost integrity in all areas and be careful not to be a stumbling block to a fellow Christian. We should make every effort to live at peace with others (Romans 12:18). This does not mean, however, we will never offend a fellow Christian if, for example, a rebuke is needed. Even though we speak the truth in love (Ephesians 4:15), we might still offend. We must live by the truth of God’s Word, and those people who are living contrary to the truth are often offended.”

And here’s what Jesus had to say to his followers on the issue:

We can and should expect persecution because of the gospel we are so aligned with!  Not only that, it’s our badge of honor, in a sense.

By all means love one another, but in so doing, don’t become salt-less in a salt-needy world. 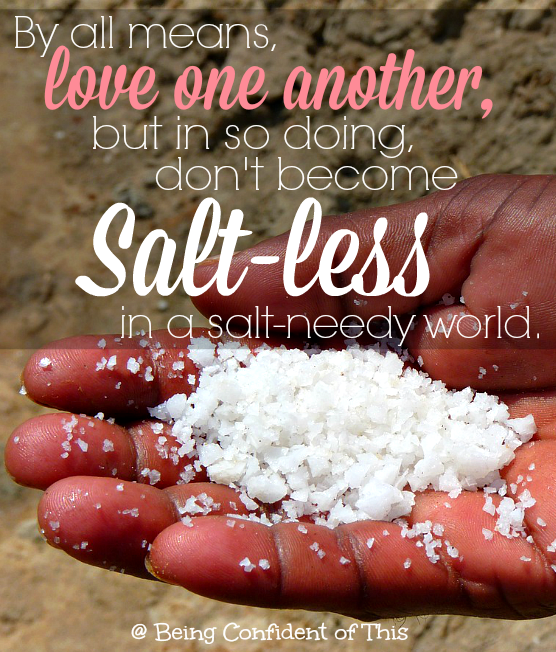 Instead, put your lamp on a stand for all to see.

“Let your light shine before men in such a way that they may see your good works, and glorify your Father who is in heaven.” Mt. 5:16

So this is me,

praying that by it, others will see!