It happens every year around this time, when nature eases the northern hemisphere into the Fall season with ever-cooling evenings and misty mornings.

When pumpkin-spiced everything invades North America, we can be sure the season is well underway, and along with pumpkin-spice, we’re sure to read an opinion or two about Halloween and Christianity.

I’m not sure about you, but the Halloween issue is something I’ve struggled with as a Christ-follower (it’s right up there with what to do with Santa, the Easter Bunny, etc.).

What to do with Halloween is one of those be-in-the-world-but-not-of-the-world gray areas that so often divides Christians.

Yes, I’ve researched the history of Halloween and Christianity –  both the pagan roots of the holiday and it’s Catholic counterpart, All Saint’s Day. I’ve even read a few articles lately about what Christians should or should not do in regards to this day.  I’m just not sure I agree that there is one “right” way anymore.

The problem with the Great Halloween Debate is that scripture remains unclear on what to do with such holidays. How to celebrate (or not) is of the those “gray areas” where the Christian response is not dictated by scripture alone.

Unlike other potential sin issues on which scripture is clear, such as sexual immorality, dishonesty, theft, murder, and so forth, we read very little about what to do with man-made holidays.

For this reason, much of what we read on Halloween and Christianity tends to be human opinion rather than scripture-based mandates.

We’ll find similar opinionated arguments about whether or not we should celebrate Easter and Christmas, yet somehow Christians have managed to bring Christ to the center in many ways for those holidays in spite of their pagan roots. 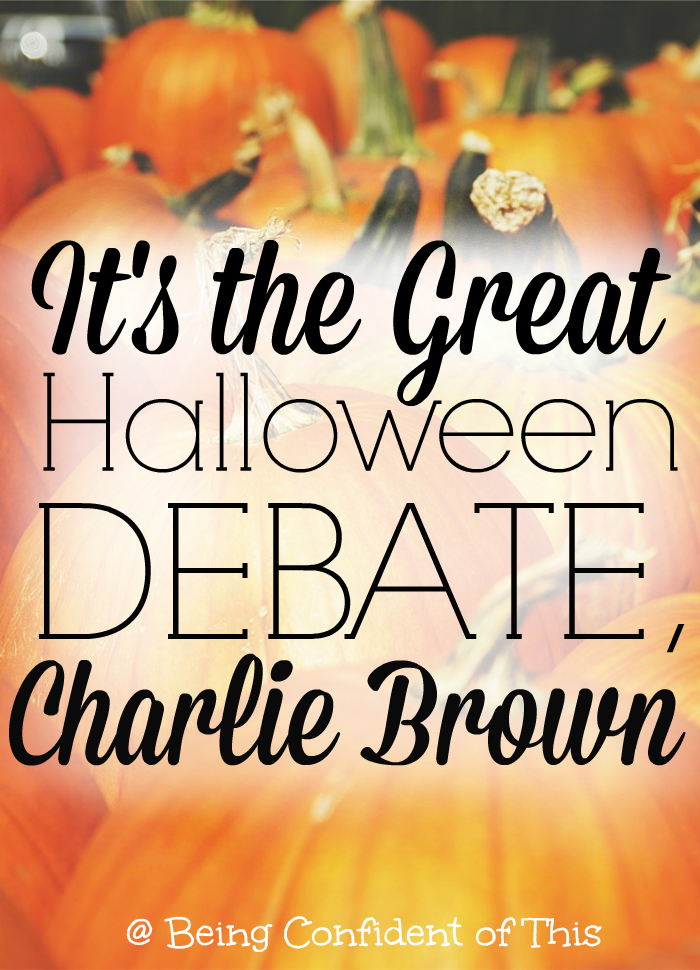 Is it possible then, that Halloween might be redeemed in the same way? Or are Halloween and Christianity simply incompatible?

Although we don’t find the word “Halloween” in scripture, we do find examples of debates over other worldly issues dividing the early church.

The Corinthian Church debated over meat that had been sacrificed to idols (see chapter 8 of 1 Corinthians), which some considered to be tainted, evil meat and as thus, inedible. Here’s what Paul had to say on the issue:

According to this passage of scripture, those who ate meat that had been sacrificed to idols were neither right nor wrong.  It wasn’t better to do one OR the other. How can this be?

The morality of the meat debate depended not on the issue itself, but on their own personal convictions.  What is sin for some may not be sin for others in such scriptural gray areas.

Another example of debate over meat can be found in Romans 14.

Once again Paul reminds these early Christians that the matter of whether or not one should eat meat sacrificed to idols is one of personal conviction.

Neither the partaker nor the abstainer should despise the other!

Then, in verse 5 of Romans 14, we find this interesting advice:

“One person esteems one day as better than another, while another esteems all days alike. Each one should be fully convinced in his own mind.”

At first glance, this verse may be taken to speak to the Sabbath and on which day Christians should celebrate it.  But according to various Bible commentaries (Matthew Henry, Warren Wiersbe, etc.), it was more likely a reference to traditional Old Testament celebrations – whether or not to continue celebrating them.

According to Paul, “each one should be fully convinced in his own mind.” It’s up to us as individuals, gifted with the power of the Holy Spirit, to decide about Halloween and Christianity, for ourselves.

We so often look to other Christians for opinions on such gray areas, or we judge fellow believers as right or wrong based not on scripture, but on our own personal convictions. We are guilty of looking to others for how to walk out our faith here on Earth when we should be looking to the Lord alone.

Let the Lord tell you what to do!

I’ve come to the conclusion that I can’t tell you what to do about The Great Halloween Debate.  When it comes to Halloween and Christianity, each person must come to on his or her own personal conviction.

And if you, like me, lie somewhere in between on the Great Halloween Debate, then let it be “as unto the Lord,” as well.

Maybe, just maybe, making the right choice for Halloween is not so much about the details of how we celebrate (or don’t celebrate) but the why behind it.

And any day with Jesus as the focus is a good day, in my opinion, whether we partake or abstain.

“Do not be overcome by evil, but overcome evil with good.”

Perhaps the best way to overcome evil, to be a light in the darkness, is to quit biting and devouring one another and focus on loving each other instead.

Let’s not be like Sally in It’s a Great Pumpkin, Charlie Brown. She worried over whom to believe – Linus or her other friends.  Rather than forming her own convictions, Sally allowed herself to be swayed by others throughout the night, leading to a lot of unnecessary worry and eventual frustration.

Let’s drop the Great Halloween Debate, shall we?

Instead, let’s just follow hard after Christ and quit worrying about what others are doing (or not doing).

Sharing with : Grace and Truth