We’ve reached  the third and final week of our Much Ado about Missions series – helping you develop a missions mindset in your home!  If you missed the Introduction to this series, you can view it here.  Also, if you need to catch up, you can find all of the posts listed under the weekly wrap-ups:  Week 1 (teaching missions in the home) or Week 2 (missions experiences for the whole family).

In our third week, we’re focusing on praying for the Nations.

I don’t know about you, but I often pray for unsaved friends and family members.  And since my husband is a pastor, I usually remember to pray for the unsaved in our local community.  I also pray for our missionary friends and those we support.

However, one thing I seldom remember to do is pray for the most unreached people groups of the world!

Today I’m going to share with you the T.H.U.M.B. method, borrowed (with permission) from some new missionary friends.  The T.H.U.M.B. method is unique because it focuses on praying for the largest unreached people groups according to specific prayer points based on the spiritual beliefs of those groups.

Unsaved people will always exist on earth until the end of time.  However, the Bible is clear that all nations must be reached with the gospel before Christ will return.  Unreached people groups are those who have literally no gospel presence. It’s not just that they are unsaved, but that they also have absolutely no opportunity to learn of salvation!

Just think of it : whole generations of men, women, and children are being born, living, and dying without ever hearing of God’s provision in the form of Jesus.

As a follower of Christ, I would like to be more intentional about praying for these unreached peoples, that they might have the opportunity to hear the Good News for God’s glory!  I want my children to learn by my example, too. Our plan is to use the T.H.U.M.B. method and pray for one group each day of the week, Monday through Friday.

One apsect of praying T.H.U.M.B. that I love most is that it is so easy to remember! 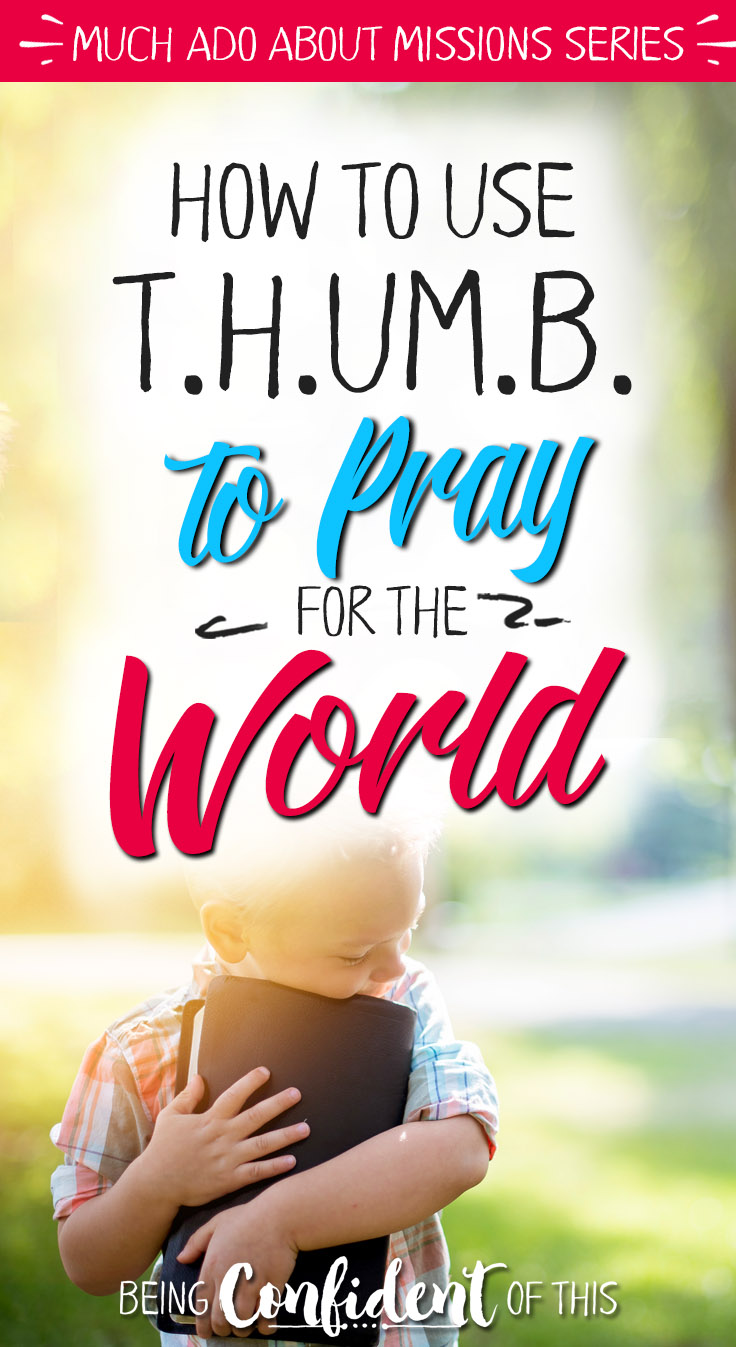 T – Tribal groups – as you might imagine, these are people who live in remote locations, some only reachable by helicopter or boat or weeks of hiking.  They have their own languages, cultures, and spiritual beliefs.  Many tribal people live in fear of upsetting the spirits, beings they believe are responsible for the health of family members, the growth of crops, and so forth.  So, when bad things happen, it’s because the spirits are unhappy and must be appeased.  Often these beliefs lead to tragedies such as witch trials, ritualistic deaths, beatings and other brutality. These people live in oppressive spiritual darkness.

H – Hindus – Hindus worship many, many gods.  Therefore, one of the challenges missionaries and believers face in sharing the gospel with Hindus is differentiating between their gods and the One True God.  Sadly, Jesus can easily become just one more god that they add on.

U – Unbelievers in China – they cheated a little on this one to fit the acronym. 🙂  The unbelieving in China are over a billion strong!  One of the unique challenges faced by missionaries to this particular unreached people group is that because of the communist government, believers must be careful about how they share their faith.  China is not fully open to missionaries, so many believers enter as teachers, businessmen and women, and so forth. They work jobs while also trying to learn Chinese and develop discipling relationships with others.

M – Muslims – the Islam religion is spreading world-wide.  Muslims believe in only one god, Allah, but they believe that Jesus was merely a prophet, like so many other prophets.  The Islam faith rests on the pillars of Islam, many of which are based on “good works.” Like China, many parts of the Muslim world are still completely closed off to missionary presence.

B – Buddhists – There are various forms of Buddhism, but most Buddhists do not believe in a god or gods.  They do, however, follow the teachings of a man  named Buddha, who emphasized the need to understand self and the world in a more “enlightened” way.  While I don’t understand all of the Buddhist beliefs and practices, I do know that much of it is based on personal efforts.  Thus, the need for a Savior is a foreign concept.

For more information on the T.H.U.M.B. technique and its specific praying points, please visit Beyond the Bullingtons – the Bullington’s are nearing the end of their training to be church-planting missionaries with New Tribes Mission. 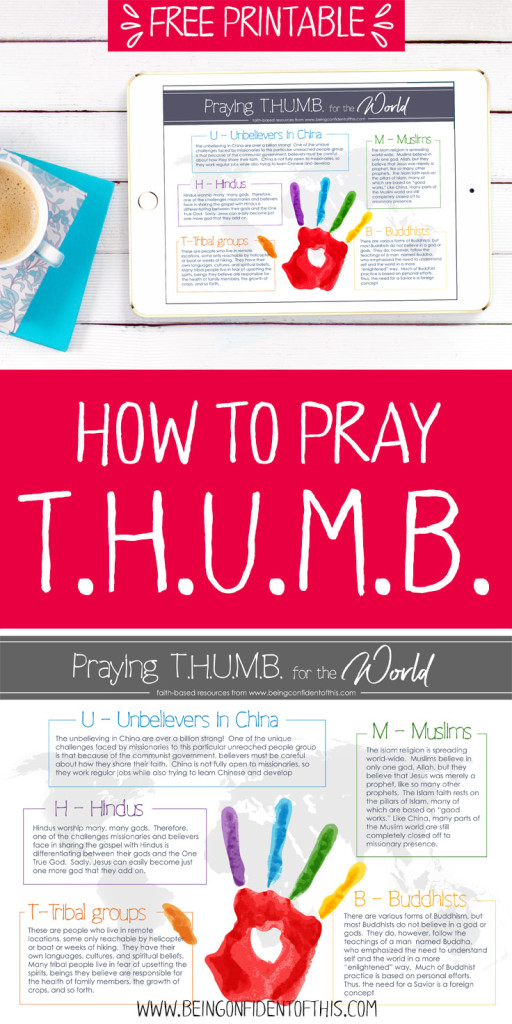 Why not make praying T.H.U.M.B. part of your daily or weekly prayer routine?

As your children, or even grandchildren, grow old enough to understand, you can teach them this acronym so that they might pray for the largest unreached people groups alongside you.

You might even consider praying for a different unreached group at a certain time of day, such as a mealtime or  bedtime.  The acronym is easy to remember, so why not connect it to an easy-to-remember time of day?

As I mentioned in the introduction to the Much Ado About Missions series, nearly a third of the world’s total population remains unreached.  Praying is one way that we can all do our part!

How can you use the T.H.U.M.B. method in your home?

Get your FREE copy of Praying T.H.U.M.B. printable by signing up below! 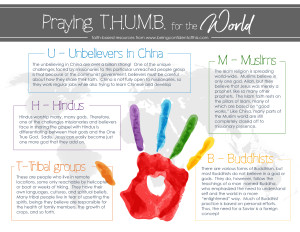