Last summer we sold our home and moved to the community that we are currently ministering to.   We were very blessed to be able to move into a larger home, and I just knew it would be perfect for the kids and perfect for entertaining people.  What I didn’t count on was the time it would take to adjust to cleaning and maintaining a larger home!

I quickly found myself overwhelmed by the cleaning projects that come with maintaining an older, farm-style home.

I struggled for months with the housework and felt like I was always “behind.”  Because I felt frustrated and overwhelmed, every little mess the kids made irritated me – every spilled cup, every toy left out, every article of dirty clothing on the floor – and I often found myself grumping at them even as I was telling myself to have patience.

I felt like I was losing my mind!  It was as if I was stuck in Romans 7, knowing what I wanted to do, but feeling utterly incapable of doing it.

So, after many tears of frustration and quite a bit of prayer, my husband and I  decided it was high time to expect a little more of our four children.

You see, our children have always had chores, but in the craziness of moving and settling in, we’d become lax in our supervision of them.

We decided that the best way to save my sanity was to create new chore charts!

I set about researching some age appropriate chores since we have such a wide age-span in our family and quickly realized that we had failed to see how much our children had grown.  Obviously they had grown physically, but we failed to notice they were now also more mature and more capable of handling more difficult tasks.

For our younger two children, we chose this flip-up system with pictures of each daily chore.  When all chores are finished and flipped, they can see their names spelled out.

Need a little help getting started? You can check out my parenting board on pinterest for DIY tutorials that I used as a base for building my own.  (Also, my amazing sister has taken these flip charts a step further with some great ideas at her blog Love Notes.  In addition to the flip chore charts, she utilizes a morning and evening checklist and a chore jar, where children get to choose an extra chore to complete and receive a nice prize.)

Preschool chores focus mainly on taking care of the body, and beginning to take responsibility for their own messes.  We chose to incorporate things that should become daily habits such as: brushing teeth, making bed, getting dressed, clearing dishes from the table, picking up laundry, and picking up toys.

They both remain very enthusiastic about flipping up the chores they have done each day, even after several months have passed!

In fact, our daughter often wants to do her bedtime chores (laundry) in the morning because she wants her name to be complete. 🙂

Our older boys have more complex chore charts that are laminated so they can be re-used.  We use dry-erase markers to check things off.  One of the things I like most about the chore charts for the older boys is that they are divided into categories that emphasize different areas of their personal responsibilities.

You can see the various categories highlighted on the left in the picture below.

The weekly responsibilities have options to allow for personal choice, and the tasks in that area of the chart are more difficult for our oldest son, who is 13. 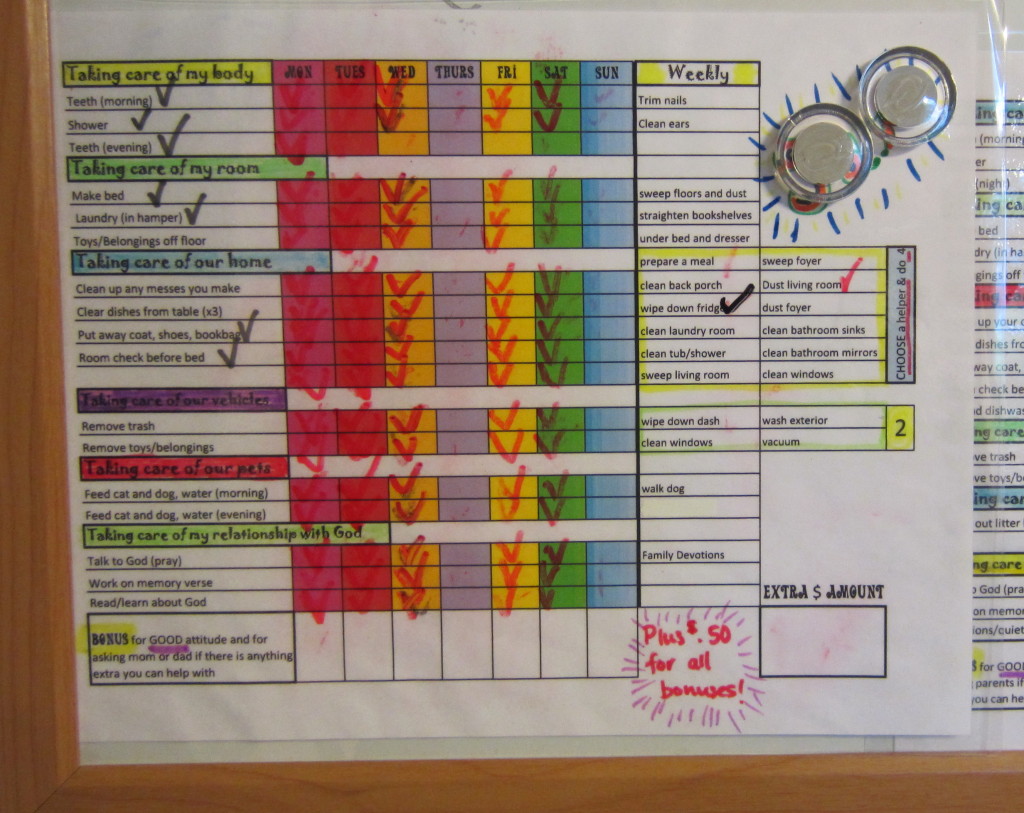 (One important note: the “Taking care of my relationship with God” area is included only as a reminder to our older boys.  We don’t want time with God to be assigned a “task” status.)

In our home, chores are part of being a family and working together toward a common goal, which is to be good stewards of the material things God has given us.

Doing chores helps our children to learn personal responsibility as well as team-work.

For that reason, we do not pay our children an allowance in relation to their chores.  Instead, we reserve allowance for teaching financial stewardship and how money works in general, but that is just our family preference.

However, our older boys were understandably less excited about the new chore charts, and our fairly intense 7-year-old was so overwhelmed by the change that he was practically in tears.  (What he didn’t realize at first is that most of the things on his list were things he already does on a daily basis, like brushing his teeth and making his bed.)

In an attempt to lighten the mood and help them adjust to additional responsibilities, we added a bonus for good attitudes and for helpfulness without prompting – an additional 50 cents on their allowance.

For our new chore system to function well, we realized that we would need a consequence for those times when our older boys failed to complete their chores.  We wanted the consequence to be more of a learning opportunity (“the punishment fits the crime” approach).

Eventually we settled on this method:  if there is a pattern of a chore going undone, then the consequence would be to complete the undone chore, as well as an additional one.

I love this solution!  It simultaneously helps me and provides an unpleasant experience that they don’t wish to repeat. I’m happy to report that we rarely have to enforce consequences with the chores because the boys really, really dislike doing extra chores.

Although we’ve had a few bumps along the way, our house has been much tidier in general, considering we have four children living here.  I no longer feel overwhelmed on a daily basis.  Additionally, I’m less uptight about the messes the little ones make because I know they’ll be picking them up before bed.

My sanity has been restored!

Perhaps most importantly, I know that developing these good habits now will benefit them greatly as they grow into adulthood.

Although initially the chore charts mean a little more work for us parents in supervising and making sure tasks are completed (or even teaching a new skill), the goal is to eventually make parenting a little easier in this area of keeping a tidy home.

So, if you’ve been feeling overwhelmed by your housework, feeling taken for granted as the one who cleans up after everyone, or feeling like you just might lose your mind, consider the following questions. 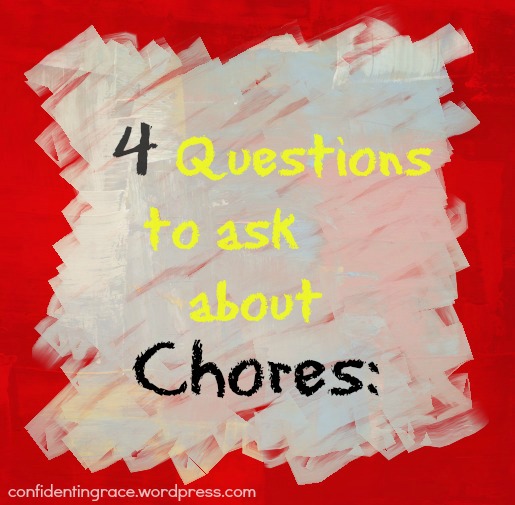 4 Questions to ask about chores:

For now I am very happy (and sane!) with our current chore charts, but I’m sure after a time we’ll need to look at it again and make changes. I wouldn’t mind trying out a few different methods to give the children a variety, to keep it fresh and exciting.

If you don’t currently have a chore system in place, why not give one a try? It just might save your sanity!

What methods do you use for teaching responsibility and team-work in the home?  Give us your best advice in the comments!

For more great ideas on how to maximize the flip charts for younger children, check out this blog:

Also linking up at: