You may have heard of the “license to sin” as some call it – that tendency to swing the pendulum so far to the side of grace that sin holds little weight. I think a more apt description of this problem is this: the desire to be your own boss.

In mankind the desire to be the boss revealed itself at the very beginning of time. I can just hear Adam and Eve’s thoughts now…It’s my choice. It’s not going to hurt anything to take just one bite. Besides, it looks really good, and why would God want to keep us from something that is soooo gooooood if He really loves us?

Here’s the problem as we see it in our culture today.

We have elevated grace to the false position of self-rule and thus minimized sin.

We believe we can make our own choices because Jesus already paid the price, right? We’re already forgiven.  Besides, there’s that verse in Galatians 5 that says “it is for freedom that Christ came to set us free…” (Gal. 5:1)

We use the word “freedom” to justify our own sin.

How sad that we allow the Enemy to use a beautiful thing like freedom to turn us away from Christ and toward our own fleshly desires!  Such a move is reminiscent of the Screwtape Letters.

The problem with such thinking lies in the meaning we assign to the word freedom. We like to think that freedom means self-autonomy – nobody can tell me what to do!  That’s what the world teaches us to believe.

Yes, it certainly is for freedom that Christ came, but not just any freedom and certainly not the type of self-serving freedom that the world teaches. 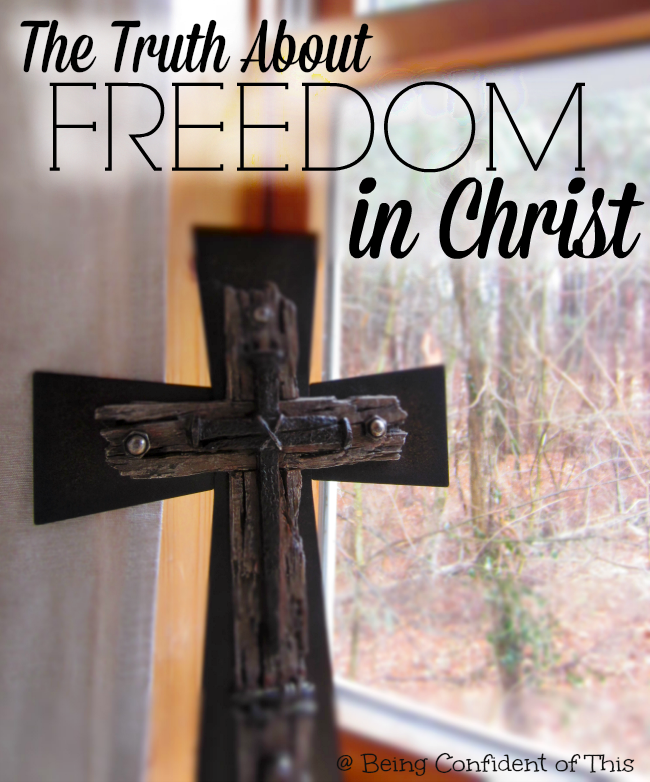 Christ came not for the freedom to do whatever we want but for freedom from the slavery of sin itself. That’s the part that we so often get wrong, friends, and I’m just as guilty.

We make believe we have no master but ourselves when we choose our way over God’s way. Ironically, when we do so we open the door to the master of sin, Satan himself. We return to slavery of our own free will.

“ What then? Shall we sin because we are not under the law but under grace? By no means! Don’t you know that when you offer yourselves to someone as obedient slaves, you are slaves of the one you obey—whether you are slaves to sin, which leads to death, or to obedience, which leads to righteousness?” (emphasis mine)

If we persist in sin by denying its power over us or downplaying its effects, then we deceive ourselves.

We willingly choose to let the enemy have his way with us.

And that, my friends, is a dangerous choice.  Sure, we know our eternal destination is secure if we’ve truly accepted Christ as our Savior, but that does not make us exempt from the present reality of worldly consequences.

In the same chapter of Galatians where we read about freedom in Christ, we find this admonition:

“You, my brothers and sisters, were called to be free. But do not use your freedom to indulge the flesh; rather, serve one another humbly in love.”

And in the next chapter of Galatians we find this verse about reaping what we sow:

A quick examination of sin in the early church demonstrates deadly consequences of sin here on Earth:

Can you imagine any worse consequence than being given over to Satan for a lesson?

We may believe that our sin isn’t hurting anyone else but ourselves, but we would be wrong on that count, too. We can bet that the enemy will seize any chance to lead us back into bondage… and drag a few others along with us.

And won’t the enemy be giddy with delight when sin does come to light?  Relentless guilt. Reputations ruined. The lost turned away from truth, stumbling over our hypocrisy. People disillusioned, maybe even wounded.

Sometimes whole churches and ministries, yes even nations and civilizations, fall simply because of our desire to rule ourselves, be our own bosses.

The truth is that the often misquoted and misused “freedom in Christ” found in Galatians is about so much more than freedom from rules and freedom from sin; it is freedom to relationship with the God of the universe.

The veil has been torn!

We no longer require a priest to help us with our sin-debt, to mediate between us and God. We are no longer separated by sin! Because of Christ, we come to the Lord directly, and in return, He gives us life.  We are part of His family.

According to the Word, real freedom is found by letting Christ be our master and making ourselves slaves to righteousness.

It’s the great paradox of grace.

Only by choosing the Living God as our boss can we be released from the bonds of self and sin which ultimately lead to death.

True freedom in Christ, then, is a direct result of the grace that rescues us from death and plunges us into new life.

“What shall we say, then? Shall we go on sinning so that grace may increase? By no means! We are those who have died to sin; how can we live in it any longer?”

How can we live in it any longer?

This is grace, friends, that the Creator of the Universe would choose a lowly sinner and mold him into the image of His most precious and perfect Son.

Anything less and we limit the power of grace – we miss out on the best aspect of the gift of Salvation!

Do you long for true freedom, friend?

and make Christ the boss of you.

Sharing with: Grace and Truth, Missional Women, The Weekend Brew