Hello, faithful readers!  Some of you know that I was on vacation with my family last week.  We spent the week unplugged.  I wanted to jump right back in on Monday, but vacation didn’t go exactly as planned…

In a cosmic meeting of great expectations and unplanned frustrations and discouragements, vacation became a lot more work than we all intended and culminated in what could have well been the deciding event at Buttkill Falls.  The rest of the world knows this picaresque waterfall by it’s real name, Bushkill Falls, but in our family, it will forever be referred to as Buttkill Falls because it broke my behind. Literally.  But that’s really the end of the story (no pun intended), so let’s go back to the beginning!

Three years ago, we went our first family vacation, not just your typical family getaway, but an extended family vacation consisting of our family, my parents, my brother and his family, and my sister and her family.  The adults enjoyed a lot of together time while the little cousins played.  It was wonderful!  While that trip was not without its own frustrations, we enjoyed ourselves so much that we decided to make it a new family tradition that should take place every other year.

For those who don’t know much about my family, this vacation is important to us.  Because my parents were missionaries in PNG (Papua New Guinea), we spent a lot of years separated in various ways, sometimes even in different countries.  Today, we are separated into three different states.  So, like many families who have moved apart from each other, finding together time is difficult, even during the holidays.  And I think at least for me (since I can only speak for myself), those years spent apart overseas make that together time so much more significant and needed.  So, family vacation was the perfect solution!  What could be better than a whole week together?!

For many reasons, planning this second family vacation became a lot more complicated from the beginning.  In fact, we didn’t even get to go the year that we had originally planned.  Instead, we waited another year, and faced even more hurdles.  So by the time we worked through the hurdles and had firm plans in place, we were all anxious to actually get there. Expectations were at an all-time high.

Unfortunately, the discouragement began even before we left!  We experienced unexpected financial issues and so did some other family members.  The second house being rented by my sister’s family was flooded the week prior to our departure, and they were left with no place to go to.  In addition, One of my nieces started throwing up the night before they planned to leave.  The opposition we faced was unreal!  In fact, I have no doubt that the Enemy was at work even before we left, trying to suck the joy out of our much anticipated family vacation before it ever started.

But, in my father’s words, my mother is an eternal optimist, and thankfully some of us inherited this characteristic from her. 🙂  So, we prayed, and prayed, and my sister’s family actually left by faith before final arrangements were even made for their rental home!

So many things went wrong that week: the rental homes were not what we were expecting (in fact, one had to be changed due to mildew and other general grossness), couples argued, family members failed to communicate, and the weather forecast predicted rain. all. week. long.  Have you ever spent a week in a crowded home with 11 children, all but one under the age of 8?  It wasn’t looking good for a week of peace that we so desperately needed.

But as I mentioned before, many of us are optimists and even those who aren’t optimists are at least believers in the God of the impossible.  So, we forged ahead with vacation plans.  There was a family church service on Sunday, followed by game time, and a beach day on Monday, and Guys golf followed by Gals shopping on Tuesday.

On Wednesday, it rained all the way to Buttkill Falls.  But we were determined. Besides, what else would we do in a crowded cabin with a pack of wild children? 🙂  The nice lady who charged us the outrageous admission price (yes, we outdoor lovers PAID to hike!) warned us that the trails would be slippery.  And to make a long story short, after misunderstandings and whiny, sometimes even disobedient kids and lots and lots of stairs, it happened. I warned my mother about a particularly slippery set of wooden steps, turned to go down the next one, and fell down three steps directly on my tailbone.

I couldn’t catch my breath at first, and then when the air came, so did the tears.  My arm was already bruising from the fall and my rear hurt terribly.  I assumed it would go away after a while, and it did go numb for a bit, so we finished the hike.  But not without another spousal argument and multiple instances of child disobedience.  The one redeeming aspect of Buttkill Falls was the awesome playground that we used to wear the kids out before hopping back in the van for a painful, hour-long drive back to the cabin. 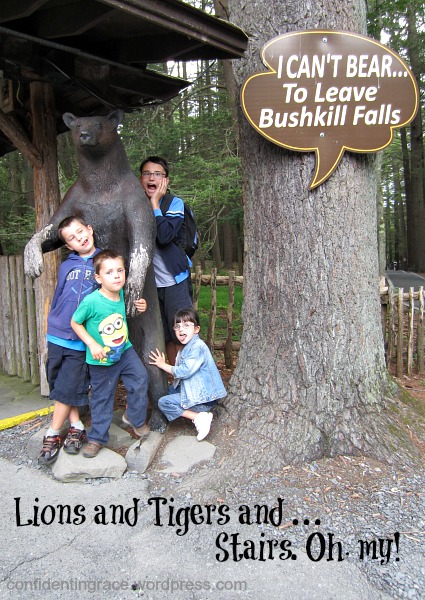 Needless to say, the rest of the vacation wasn’t exactly what I had envisioned.  There was a day spent getting x-rayed and medicated, followed by a day in bed while the others enjoyed a train ride (or train wreck, as my brother-in-law liked to call it), followed by a long drive to a huge boulder field that I couldn’t walk on (but at least I got to see!).  And then there was the day of the ten hour drive home and the donut pillow that failed to do its job.

It felt like one of those annoying movies where everything that can go wrong, does, and the characters never catch a break! 🙂

In spite of my unmet great expectations, I can honestly say I would choose to do it again.  Why, you ask?  Because in between the arguing, the parenting issues, the broken bones, the frequent disappointments, and the many other challenges that came our way that week, we had moments, family moments of joy, of togetherness, of teasing, of laughter, of memory sharing, and of memory making.

And we all enjoyed an entire night of rear-end jokes around the game table. 🙂 (Better to laugh than to cry, right?!)

In our humanity, we love to make these perfect plans; we have these great expectations for life, for people, for jobs.  So often, they fall short, and we’re tempted to let ourselves become discouraged.  We’re tempted to lose heart. We’re tempted to see the negative, the bad, even the evil, everywhere we turn.

Our God is higher than any other…

And He holds us in the palm of His hand.

His plans are not our plans.

I still don’t know why I needed to break my tailbone in the middle of family vacation or why family vacation had to feel like  work instead of pleasure so often, but He does.

I pray that the more I grow in the confidence of His grace, the more my great expectations will be His great plans.

And in the meantime, I choose to look for the good.

Even if it means surviving more Buttkill Falls incidents. 🙂

When have your great expectations ended in disappointment?  What brought you joy in spite of your failed plans?