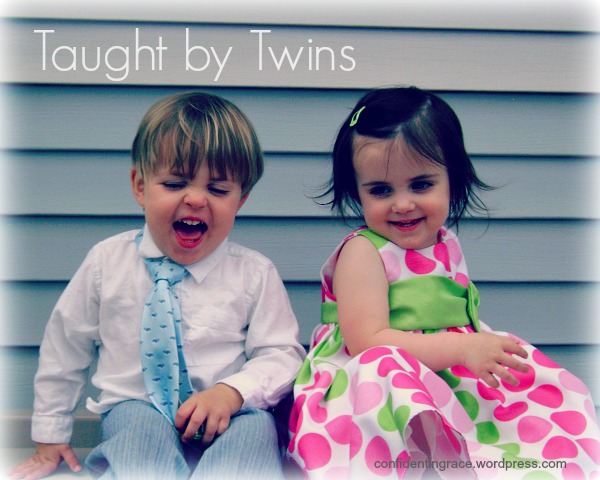 Close to five years ago, God chose to bless our family in a totally unexpected way.  It was a blessing I never would have chosen for myself, one I was completely unprepared for and one that brought with it a great deal of anxiety.  It’s a blessing that often continues to challenge me today.

The blessing we received was the gift of two children at one time – twins!  From the moment we received that awe-inspiring news, I began to worry.  The truth is that I like to be in control; I like to plan things in advance.  I like life to be organized and tidy, not uncertain or chaotic.  Two babies at once was not part of my plan!  In my turmoil, I didn’t know whether to yell, “Praise the Lord!” or break down in tears.

Thus, I spent the early portion of my twin pregnancy struggling with fear, worry, and what if’s that I never even considered with my first two pregnancies.  What if we lost one or both of them?  What if they were born prematurely?  What if they had medical issues?  What if I had to have a C-section? What if I just couldn’t handle twins?  What if our middle child (then our youngest) couldn’t handle being displaced by two siblings at once?  What if I couldn’t figure out how to nurse two at a time?  What if we didn’t have enough money?  The doubts strung out in a long line. 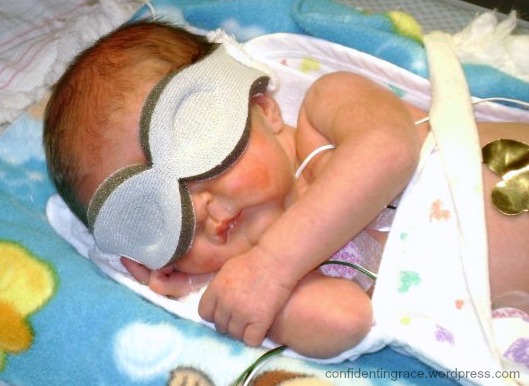 On top of the what ifs, I was riding the roller coaster of amplified pregnancy hormones as a result of carrying two babies at one time.  One moment I felt euphoric excitement and extreme gratitude for this unexpected blessing and the next – sheer terror.  Even my fear became complicated by the addition of guilt, guilt for sometimes thinking, “it would be easier if it was just one baby,” or “this wasn’t in our plan.” As soon as the errant thoughts entered my consciousness, I felt a shame like no other.  So many women would give anything to carry just one baby, and here I was complaining to myself that I was being blessed with two!

I knew I was sinning.  I knew I needed to trust God more.  I knew that He was in control!  I knew His grace was sufficient for me.  If He chose to give us twins, then He knew we could handle it with His strength. I prayed constantly over these truths, but I was having so much trouble believing them. I put up a good outer front – it was easy to share my excitement with others and leave out the more shameful feelings.

One day when I confessed my worry that I would be inadequate, a wise woman at my church kindly told me that God knew I could handle two at once, or He would not have entrusted these babies to me.  A light bulb burst into light, and I suddenly saw my unexpected twin pregnancy anew, as an honor, a privilege.  Instead of reveling in my blessing, I was wallowing in worry.  I was wasting this unique experience. 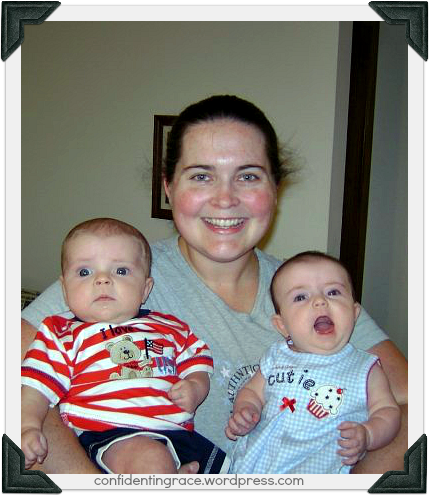 Little by little, the Lord began providing for our physical needs, as if to provide physical evidence for my skeptical spirit.  He knew we needed a larger vehicle, so He provided a minivan for our family at very little cost to us.  He knew we’d need double the clothing, so He sent neighbors and friends with bags of gently used clothing and other baby necessities.

Our church family collected gifts for us also, including a mountain of diapers that tumbled over onto the floor of the bedroom closet. We received countless gift cards, often from unexpected sources!  I was completely overwhelmed by a God who takes seemingly impossible situations and works out the details without any help on our part, and I praised Him for meeting our needs and encouraging us on this new journey.

My pregnancy progressed as uneventfully as a twin pregnancy can and as I neared the end, I thought we might actually make it to full term.  The specialist I was seeing joked about how great my uterus was and how well my body was built for carrying babies.  I beamed, pleased my body was cooperating so nicely. All was well.

And then the swelling began: first my legs, then my hands, and finally my face.  I knew it was pre-eclampsia because I’d experienced it twice before but never this quickly.  I called the specialist to report my symptoms, already knowing the answer I would receive.  Come to the office immediately.

Not long after arriving at the office, I was ushered over to the hospital and told that a C-section was imminent.  C-section: that dreaded word that made me want to run in the opposite direction.  Furthermore, my pregnancy had only just reached 34 weeks, so I required steroid  injections to help mature the babies’ lungs before operating.

As excited as I was to meet our two bundles of joy, fear of the unknown crept back in, slowly and silently.  I feared the C-section recovery.  I feared the health issues facing my premature infants.  Fear slipped in little by little until suddenly, it was upon me and I could scarcely breathe.  I momentarily forgot that God was in control.  I forgot that He had demonstrated His provision over and over again for the past seven months in some very big ways.  I forgot that He promises to be faithful, and I had a pity party for myself right there in my hospital bed.  I cried.  I worried. I wallowed in fear, took a bath in its darkness. I wondered why.  Why, God?

Our twins arrived the next morning via C-section at right around five pounds each and were quickly whisked away to the NICU. It was the beginning of a very long week.  We existed in a sort of haze, but we survived.  I put off dealing with my fears and thought surely things would get better once we settled in at home. Surely I wouldn’t worry so much having them right next to me instead of in another section of the hospital. 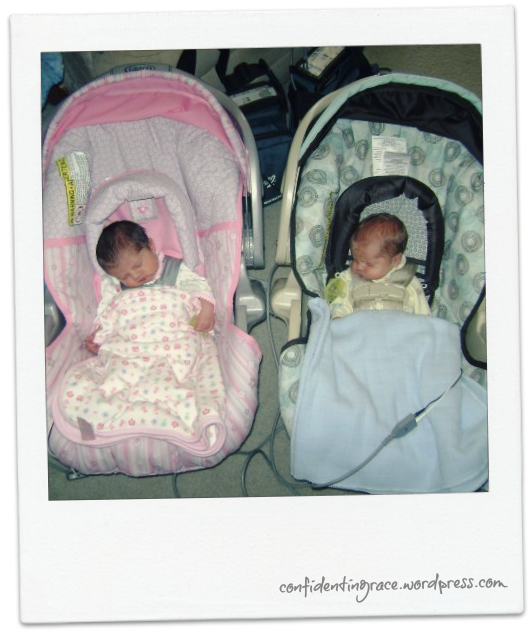 However, when we finally did make it home, I realized very quickly that it was just the beginning of a long haul.  Both babies came home on apnea monitors, which made just about everything more difficult: feeding, sleeping, travelling, and so forth.  Additionally, we had already spent an entire week apart from our two older boys, including missing our oldest’s birthday party, so they were understandably needy, as well.

The nights were even more difficult as we woke ourselves every three hours to feed babies that needed assistance, and then I still had to pump.  It was exhausting, and I continued to worry about them.  Did they drink enough? Would they gain weight?  Would I ever be able to nurse them?  What should I do when they both cry at once?  How can I get them on a schedule when one seems to need more sleep than the other?  So much uncertainty.

At first, I read a lot of literature on parenting twins, scheduling, and so forth.  I worked at getting them on the same schedule and tried not to feel guilty about the lack of time with our older children.  I decided to focus less on doing everything right and focus more on just surviving the day to day grind.  I spent time in the Word.  I prayed ever more fervently for strength and wisdom.  He told me to let go.  Quit worrying.  Trust Him that even if I somehow did something wrong, my children would still be okay.

It took a few months to come to grips with the fact that my prior parenting experience held little value in this new four-child-family world.  I had to adapt my lofty ideals to techniques that would actually work for our family.  I even resigned myself to the fact that I might not ever be able to nurse the way I wanted to (although we did eventually figure out how to tandem nurse).

I gave up on having things “just so” and became content with “good enough.” 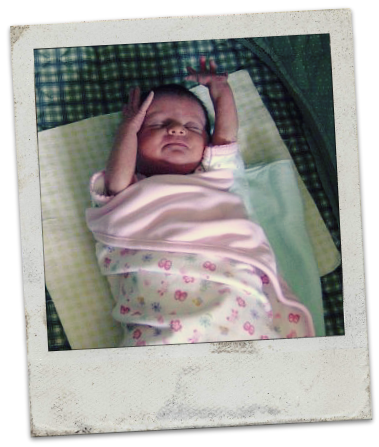 I gave in to my infant son’s desire to be held…a lot..and my daughter’s desire not to be swaddled.  I learned they were different from one another.  I learned to find quiet moments with my older children and to understand that jealousy was just a part of life for siblings, whether they have one sibling or many.

One day as I sat on the floor with my incredible infants, it dawned on me that we were no longer just surviving; we were actually THRIVING!  All four of our children were happy and despite continuing medical issues, the twins were growing and learning.  I even felt more connected to my husband as our busy household required more teamwork than ever before.  In fact, despite little sleep and little “me time,” I was superbly content.

Watching my two infants smile at one another, holding them both in my arms at once, feeding them together – all of these things brought me a greater joy than I ever could have imagined.  If you have ever seen two babies giggle and smile at one another or sleep peacefully side by side, then you know the joy I’m referring to.  It is overwhelming in its beauty. 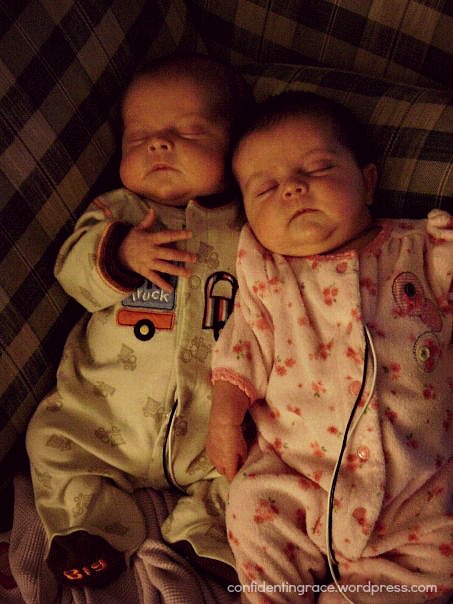 When God gave us twins, He taught me a few very valuable lessons that I try to carry with me still.  He taught me that Philippians 4:13 really IS true.  “I can do all things through Christ who gives me strength” isn’t just a nice saying, but He really can give me physical strength for the day! 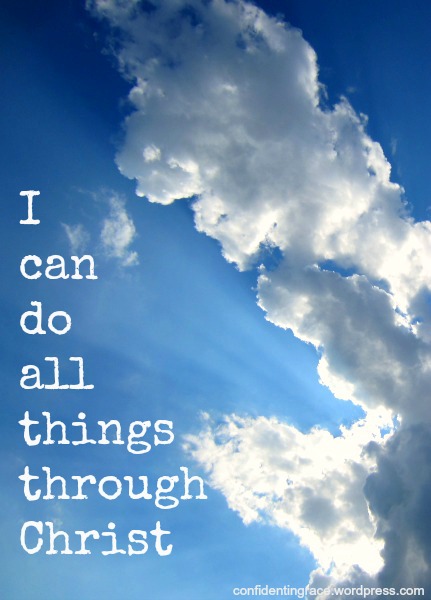 He also taught me that I needed to relax as a parent.

So what if our school age son still doesn’t know how to tie his shoes because we had twins the year before he started kindergarten?  So what if I don’t feed my children a food-pyramid-perfect meal three times a day, every day?  So what if my oldest occasionally runs out of clean clothing?  So what if the tv is on more than I’d like?

There are so many more important things in life than the details of the day to day grind of being mother to a larger than average family.  Things like relationships. Love. Attentiveness. Contentment.

The Lord showed me that if I want that abundant life my heart so desires, I need to do the opposite of what makes sense to me.  I need to quit trying harder, quit controlling more, and just relax.  Relax in His grace.  Relax in His presence.  I don’t have to control it all because He is in control.  If I remain close to Him, the details will work themselves out, often in a more stunning way than I ever thought possible. 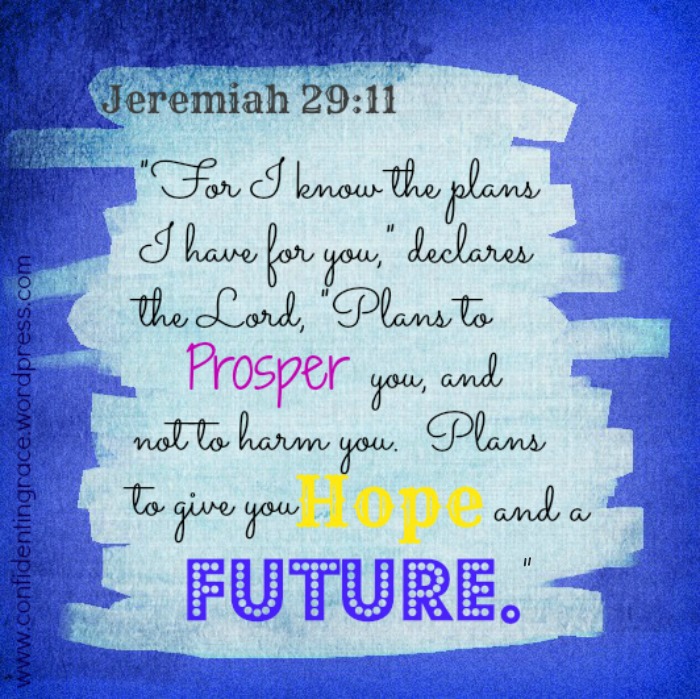 I’m profusely thankful that His plans for our hope and future included twins.  Like the Israelites in the desert, I would have settled for a return to Egypt rather than experience the glory of the Promised Land.  But He had a bigger blessings in mind for us.

Can you recall a time when God’s plans failed to match up with your plans? What were the results?